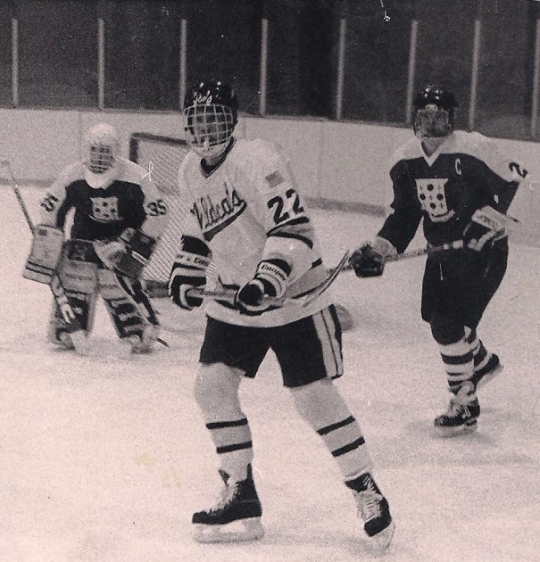 I hung onto the boards and made my rounds at the ice rink, kept going around in a circle until skating almost felt safer than walking. That first moment, when I hit the ice as a five year old Falcon, I was immediately hooked, determined to learn how to skate and play the game.

Hockey has been one of the greatest teachers in my life. I learned how to appreciate camaraderie, what it means to be part of a team. I learned how to accept defeat, acknowledge a stronger performance from the competition, only to learn and grow from defeat. I took my fair share of hits on the ice, coupled with a few cuts and bruises, only to get back up stronger than before. It taught me that speed can be graceful. I remember a hockey school coach who talked a lot about read and react, to anticipate a play ahead of time, taking action when it matters, being ready when the moment arrives, without thinking.

As a 14 year old in high school, I consciously experienced action without thinking for the first time, it was the strongest flow moment in my life so far. As a Wildcat, we played our biggest rival in the league, for the NY sound shore crown. The game was broadcast on local am radio, our principal was there and 800 people in the bleachers. I scored two goals as a 14 year old freshman, in the first offensive line, with two 18 year olds. We won 2 to 1.

Every stride, every pass, every shot, hit and shift was in sync with my body and mind. The radio host kept asking who this German kid is. I had potential of going further, to the bigger leagues, become a full time pro, but my path ended there, my focus as a teenager was somewhere else. I started playing again in college.

My biggest success with a team was the NCAA national championship in 1999. I had a solid year. I was on the title page of the sports section, in the local Vermont newspaper. The picture was taken right after I scored, my hands up in the sky, the headline read “The Biscuit is in the Basket.”

I played pro for two years in the 3rd division for the Beach Boys. My personal highlight was playing in front of 4.000 fans against the Berlin Capitals, in the now defunct Deutschlandhalle for a spot in the 2nd division. With the Beach Boys, I was happy to have played for the greatest coach in my career, one who gave me the opportunity to play pro.

Hockey without injuries ain’t hockey. I tore my ligaments, was blessed with around ten stitches in my face and partially lost two teeth. And a good chunk of bruises not worth mentioning. I’d say overall, I’m pretty lucky.

Albeit, it’s time to hang up my skates, I feel it, even though I was still fit to play in semi-pro leagues the past couple of years. I need to leave the game. You’ll see me playing pick up with friends or skating on the frozen ponds of this world, still feeling safer on skates than by foot.

I’ll miss the fans and former team mates, as well as the people who are the social glue of any club, who fill up the water bottles, show up to every practice and game, bring home brewed coffee and food to each ice time. And I have to thank my mom for being patient and supportive, who drove me to practice as a kid and knows how much hockey means to me.

In the meantime, I’ll continue my search for flow moments, to sync body and mind, only to get up with speed, grit and grace.