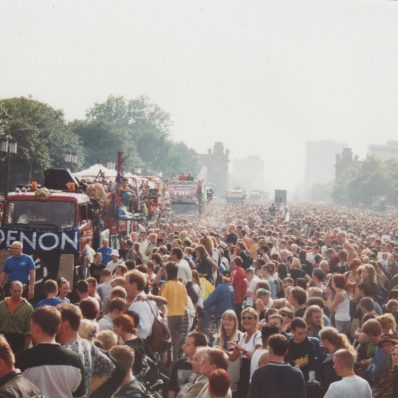 It’s hard not to look at the 90s of peace and global reconnection in light of Russia’s facist war against the Ukraine. The Berlin Wall fell thanks to the heroic efforts of the Polish union Solidarność workers and eastern German protesters who took to the streets of Leipzig.

Thankfully enough, the unheroic efforts of marketeers didn’t impress Gen Xers all too much. I think a good chunk of that generation never believed in the promise that consumerism would save the planet or that it would bring long lasting peace to every corner of China and Russia.

The citizens of the Consumer Republic collected bricks as road blocks in the development of truly democratic economics. It did and still delivers dirty money to the war and propaganda machines of autocrats and kleptocrats from their willing executioners.

Rock the vote!
Popular culture breathed political action in the 90s. Grunge and Rock ruled. MTV rocked the vote. Rage Against the Machine remains one of the most politically influential bands in our time. Kurt Cobain smelled teen spirit. David Foster Wallace predicted the corporate takeover of intermission reports and time itself in Infinite Jest. The Beastie Boys rapped for Tibetan freedom and Die Toten Hosen and Die Ärzte made antifacism popular in Germany.

Bands had a message, freedom of expression was political. I feel music is much less political now, sure there are bands out there taking a stance, such as Anti Flag or Feine Sahne Fischfilet, yet it seems that digital mainstream is filled with autotune escapism and soy latte background music.

Click your soul
Our spiritual development halted a few bricks behind the Berlin Wall, there was the Love Parade, but it’s simple message of “One World, One Future” only rang a bell to a few thumping to techno tunes. Now you can sell your soul to clickable favs, the ever presence of public privateness in social media, one that robs us of private empowerment and sucks us into superficial signifiers and screen time optimizers.

The greatest achievement of Herr Sugarmountain and Chinese Tikitaka is that almost every user works for free and throws away their precious time, only to get a cheap nudge of social capital to itch the ego or a sloppy slice of brain food.

Before social media’s toxic time existed, my first fragile magnification moment beyond the 90s was September 11th. I was in San Francisco at the time and woke up to phone calls and emails from friends who were concerned about the attacks on American soil and my safety; I was glued to the TV and my landline phone was ringing off the hook.

Another key fragile moment was the financial crisis in 2008, where home owners and stock holders got fooled. Banks got bailed out from tax payers for that sticky mantra, office criminals didn’t have to take responsibility for their actions despite #occupywallstreet. The old corporate response was to look clean, stay correctified on the surface, so they can wash their soul in green and social.

Covid as a magnifier
Since Covid, the homeless problems in America are present in massive tent cities, cracks in the health care and social system have become damn ruptures by decades of neglegence. And with the opiod crisis, too many are reliant on quick fix pain killers and drugs that let them forget about their maxed out credit cards or lack thereof. Failure to never dig deeper into systemic racism whilst consuming fear driven media produced by Fox and their counterparts creates uninformed, infantile, scared citizens.

It’s also sad to see binary thought patterns between Democrats and Republicans, which resulted in a superficial oversimplification of “to wear or not wear a mask”. It’s the pledge of allegiance I experienced in the mornings during high school in NY, the aura of ignorance to otherness, ideas and ways of living; you’re either with us or against us. On the surface, it’s sneakers, khakis and franchise food chains. There’s a lack of mindful resources for a truly local global understanding, it’s delegated to a few who are still paying off their college loans in gated communities.

In Austria with former Chancellor Sebastian Kurz, Germany’s AfD party, as well as chunks of the CDU/CSU and Europe’s poster child of radicalized conservatism, Switzerland’s governing SVP. Last but not least or what’s left of Abe Lincoln’s GOP, where money and opportunity is an excuse or justification for just about anything. Not to forget in the mix is the most radicalized conservative facist: Putin’s Russia.

Hope for the future
As always, there is hope for a better future, because new models and modes of thought will always compete with others. There are countries out there leading the way.

Finland, as always is quietly successfull. It’s already the most technogically advanced in the world, sustainable and oh so digital and equal. Finland’s military personell counts 280,000 soldiers and 900,000 in reserve plus bunkers for every citizen, the Finns are well prepared.

Then there’s New Zealand, the most successfull democratic country in fighting Covid, it’s an island akin to Great Britain, yet with entirely different results. Both countries have one thing in common, their love and respect for nature and their love for life rather than fear.

Eastsplaned
What we overlooked in the 90s was what the East actually does and did better than the West. We didn’t listen to the East. If there’s one thing I could wish for is that it’s time to get eastsplaned from citizens in Poland, Ukraine, East Germany, Latvia, Czech Republic, Slovakia, Lithuania and Estonia. What did they do better than the West? What are they still doing better than the West? How can we learn to grow and fight together, to form a stronger, more unified Europe?

They had and have better sex. Their day care systems are far superior, hence there were less desperate housewives, day care was free. And the collective spirit was stronger, even though they spied on each other and suppressed invidualism. It might sound banal, but they were less fat in many more ways than just their body.

I’m pretty confident in saying that they do more with less, whether it’s repairing cars, building a house or jump starting a new business. I also experience that my friends with roots in the East compare less with others, both in terms of meaningless brands or vacation destinations and are much less lost in externalizing happiness than their Western counterparts.

Making something great again always sounded old, rusty and terribly out of date. Making the world greater together should be the thumping beat for the future of our planet. And we’ll find the answers in the fight with our allies in the East.