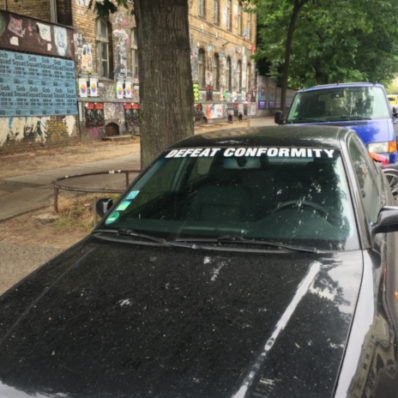 A non-corporate message seen on a car on Revaler Straße in Berlin, love it

Ever since Darpa, powered by the US military, wanted to develop a communications system that could withstand a nuclear attack or when Berners-Lee’s created the World Wide Web and Vint Cerf the TCP/IP protocol, the Web is a space that defies conformity.

It helped flatten the earth for those with a laptop who can code and write. Anyone with an Internet connection and a modem could impeach presidents, thanks to Matt Drudge who rejected “the corporate notion of news – controlling news cycles, embargoing things, killing stories,” attests the one man news show in his Manifesto.

This is the most exciting moment in the history of news. Anyone from anywhere can cover anything. And send it out to everyone.

Those early hay days of democratic empowerment, where it wasn’t about slick pics with clicks or networks behemoths enslaved by the more money mantra, are seeing a new awakening. Max Böck sees strong parts of the 90s Web, like server side rendering, no code tools or personal websites, reloaded.

I can also see the 00s Web reemerge, a time when podcast tech came to life, thanks to Dave Winer’s RSS and Tristan Louis idea of attaching audio files to RSS. It was only until recently, when mobile phones and bandwidth joined forces that podcasting took off; Brecht’s radio theory from the 1920s seems to be poignant in that light:

Those anarchic days of everyone becoming their own media, where everyone can communicate with everyone between each others autonomous digital spaces, are strong in spirit and never went away. We only got lost in silos the last 15 years and traded our privacy and connected ownership for centless convenience and surveillance.

Whether it’s Solid, a project to improve data ownership and privacy, from no other than Tim Berners-Lee, the microblogging federation Mastadon, originally coded in Jena, or WT.Social and Micro.blog, parts of the Web already look more like the one envisioned. They are inspiration for others to empower the endless supply of autonomous connectedness, so we can build a common sense that’s direly needed in these 20s.