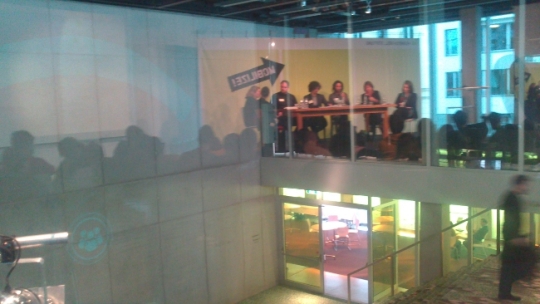 Business activists meet each other at the Böll foundation near Friedrichstrasse

I was able to take part in the mobilize conference at the Boell Stiftung, an agency for green ideas, projects and future workshop space in Berlin, and want to share some of the ideas and people present.

The Russian government enjoys throwing money at bloggers for patriotic posts, interestingly enough, blogs are regarded as human media. They don’t allow people to dance in groups on the streets. Nuriya Fatykhova added in the freedom of press panel that those subversive tactics are partially successful, especially since independent bloggers and journalists seek asylum in Finnland or Estonia.

Aha, church and football get a lot of funding in Serbia, opium for the masses, they do in Germany as well. Identifying agents of change is a challenge for institutions with professional structures, since most donors like labels and can be intellectually lazy, albeit individual efforts can be more effective. Ahmed Asery, an art activist from Yemen with notable courage, even has an official certificate from the government as being one. He inspired me the most, especially with his song Inhale Freedom, which he performed live at the change square in Sanaa.

Helpful advice from the economy of activism panel was to spread the risk from donors, to stay independent as an activist. A current trend in that space is p2p fundraising, meaning that friends will raise money for activists, which cause they support. Another point made was that there is a huge gap between traditional society and young activists. I would call it a lazy consumer divide, or those who only consume and don’t engage politically, consume synchronized media, as to confirm their already held views and beliefs, enjoy maximum relaxation and could care less about actually doing something about injustice.

I met people that helped me understand how 100 page applications work for a French freedom fighter. We discussed the idea that Berlin attracts people who care about conscious commercialism, with delays and buy backs akin to Bar25, now the Holzmarkt cooperative, praise Berlin! Let’s hope the lazy consumer divide doesn’t widen, so get out there and engage.